COVID-19: Osun arrests, enlightens, offenders for hours….Government’ll do everything to protect the State

The government of the State of Osun on Tuesday took the fight against the deadly Covid-19 a notch higher as violators of the safety protocols rolled out by government were apprehended from major streets of Osogbo, the State capital.

The culprits were arrested  for failure to use their facemasks and for not maintaining social distancing in public spaces especially inside commercial vehicles. 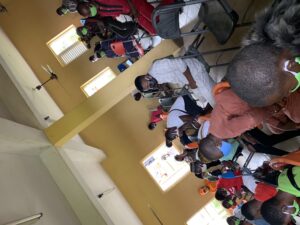 They were then taken to a Primary School hall, where they were enlightened by officials of the Ministry of Health on Covid-19 and were also made to watch videos relating to the dangers of not adhering to the safety protocols rolled out by government.

Speaking with journalists on the essence of the subtle enforcement exercise, Commissioner for Information and Civic Orientation, Mrs Funke Egbemode stressed that the exercise became necessary because of the sudden rise in the number of Covid-19 cases in recent times.

She said the State government had discovered that residents of the state were beginning to let down their guards with the safety guidelines rolled out by the state government.

According to her, “Some residents have decided to assume that Covid-19 is gone, they have started disrespecting the safety protocols and because of this, Governor Adegboyega Oyetola and the Covid-19 Task Force headed by the Deputy Governor, Mr Benedict Alabi are worried.

“The Governor especially is worried that the gains of the last three to four months will be lost if we continue in this manner. That’s why government has decided to do something about it”.

Reacting to questions on when the use of mobile court would be deployed to enforce the safety protocols as it is being done in other states, Egbemode explained that the idea was not out of the equation but government was not going that route yet.

She said, “Using a mobile court is not out of the equation, but we are not deploying that option yet. We already have the emergency rules that the governor signed some months ago. When we decide to use it,  a convicted  offender can go to prison for as long as six months as stipulated by the law, but that is not what we are doing for now.

“This is just the beginning. The Governor took an oath to protect lives and properties. Whatever the administration of Mr Adegboyega Oyetola needs to do to protect lives will be done. Some people need to be protected from themselves, enforcement is just starting today, it may take another dimension tommorow and the day after until we stem the spread of thevirus.

Also speaking, Commissioner for Local Government and Chieftaincy Affairs, Hon. Adebayo Adeleke explained that the temporary arrest and delay of the offenders was to serve as deterrent to others and ensure that everyone takes responsibility in the fight against Coronavirus.

He maintained that the exercise would be continuous and replicated in all the local government areas across the state to ensure that the state is able to flatten the curve of the Covid-19 spread.

It will be recalled that, the state government of Osun had announced that it is now an offence to move about without the use of face masks. Violators of the law were made to sit down for hours and watch videos of the effect of Covid-19 around the world . There were also lectures by officials of the Ministry of Health.

The Special Adviser to the Governor on Security, Mrs Abiodun Ige coordinated the exercise and ensured the successful operations.