As part of safety requirements against COVID-19, the State Government of Osun, Tuesday , officially handed the body of the late Senator Ayorinde Fasanmi to the Ekiti State Government, for his interment at Iye Ekiti. The short farewell  ceremony took place at Ita Awure at the border of the two states.

This was done to avoid breaching the COVID-19 social distancing protocol at the venue of the internment.

The State of Osun was represented at the hand over ceremony by the Honourable Commissioner of Information and Civic Orientation, Mrs Funke Egbemode; Honourable Commissioner for Culture and Tourism, Dr. Adebisi Obawale; Special Adviser to the Governor on Public Health, Dr. Siji Olamiju; Special Adviser to the Governor on General Administration, Mr Niyi Idowu.

NEMA Charges Osun To Prepare Against Flood..,…Says 28 States Prone To Flooding This Year

At the hand over ceremony, Representatives of both the Ekiti State Government and the State Government of Osun lauded the late elder statesman as a humanist par excellence and a good support system in the polity of both governments.

Baba Fasanmi: Father To The People of Ekiti

Speaking at the hand over event, the Chairman of the Ekiti State Local Government Service Commission, Chief Samuel Abejide, described Senator Fasanmi as a man of honour.

He said: “We in Ekiti State honour Baba Fasanmi with all sincerity. He was a man of honour, and one who spent his time serving humanity.

“He created indelible impressions in the mind of everyone. He was a good man and we can vouch for him. He was a reliable man, a faithful man to his people and a faithful servant of the nation.

“He worked for the progress of Ekiti. The current administration in Ekiti cannot forget this selfless man for his contributions.

“His commitment to humanity, uprightness, honesty and integrity should be emulated by all leaders and elders who should make conscious efforts to study his life and emulate his virtues”, Abejide stated.

Chief Mrs Mojisola Fafure, the Commissioner fot women Affairs and Social Development in Ekiti State, described Senator Fasanmi as a father of Ekiti State and of the nation Nigeria at large.

In her words: “Our father has just left us – a father to the nation and to Ekiti State in particular. We are  here to receive Baba’s body from the Osun State Government”.

The Commissioner for Health, Mrs Moji Yaya-Kolade, said the government and the people of Ekiti would miss the late Senator Fasanmi so much for all he meant to the State.

She said: “We thank the Osun State Government for all they have done on behalf of Ekiti. We will be taking him to Iye Ekiti, where the rest of the team is waiting to also receive Baba”.

Speaking on behalf of the delegation of the Osun State Government, the Special Adviser to the Governor of the State of Osun on Public Health, Pharmacist Siji Olamiju, said the State of Osun acknowledged  Senator Fasanmi’s affection for the State, its government and its people. 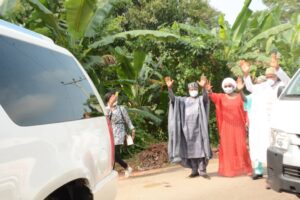 In his words: “Baba came to  Osun when  he was a young man. He meant so much to us in Osun.

“Osun cherishes him so much. His contribution to humanity, not only in politics, was immense. Mr Governor attested that Baba called him every week – such a close man to the State and its government”, Olamiju said.

The Commissioner for Information and Civic Orientation, Mrs Funke Egbemode, described Senator Fasanmi as a citizen of more than one State.

She said: “Baba found a good life in Osun, a life of achievement and a life that made him a citizen of not just one State.

“We are here today to bid him farewell at the Ekiti State border.

We will miss him. We will miss his wisdom. But he has gone the way of all mortals. We pray that the Lord will grant him rest and all of us good life”, Egbemode stated.