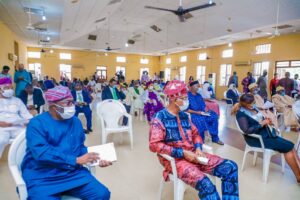 He also admonished them to hit the ground running and discharge their constitutional responsibilities with the fear of God, integrity and patriotism.

“Members of this Commission must appreciate the fact that they are being called to positions of responsibility in a State known for being in the frontline in all human endeavours, including development, peace and security rankings.

“Consequently, I urge you to work relentlessly to further improve the rating of the State by conducting free, fair, peaceful and credible elections that will be models in the nation,” Oyetola declared. 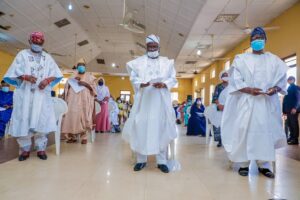 The newly-inaugurated Chairman of the election body is Barrister Oladunjoye Olusegun Oladitan.

Governor Oyetola also tasked them to brace up by putting all the necessary logistics and requirements in place to achieve a good and appreciable outing as the Council poll is fast approaching. 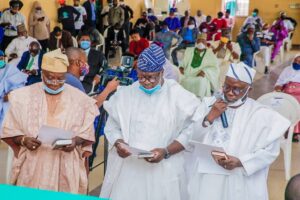 Oyetola who described the third tier of government as the closet to the people, directed the electoral umpire to strive to lay a solid foundation for a seamless transition to a people-oriented regime of governance, prosperity, service and development at the grassroots.

He said: “Local Government is central to effective governance and equitable development in any nation where the system is practised. It is the third tier of government and the closest to the grassroots. It is, therefore, pertinent that persons of integrity who have passion for the people and their welfare are elected into this tier to spread prosperity and development.

“For our local governments to achieve their aims, elections that will usher leaders into power must be conducted by people who are above board. Conscious of this fact, we have endeavoured to appoint people of unquestionable integrity, impeccable character and flawless antecedent in their private and public lives,” Oyetola said.

The governor further added that: “We have demonstrated loudly that our Development Agenda as a government is anchored on adequate, qualitative and equitable distribution of services to the people across the State and the programmes and development we have provided since we assumed office have proved that we have been faithful to the tenets of this Agenda.

“The ability of the people to continue to enjoy these laudable services would depend on the resolve of this Commission to conduct elections that will reflect their wishes and preferences and consequently produce leaders that have the integrity, the strength of character, the passion and the demonstrable skills and competencies to provide services to the people.”

Speaking, the Chairman of the Commission, Barrister Oladunjoye Olusegun Oladitan, expressed profound gratitude to Governor Oyetola for finding him and his team worthy of appointment just as he assured the entire citizens of the State that his team would discharge their duties with all fairness and fear of God.

He assured all the political parties in the State of a level-playing field and implored them to cooperate with the Commission, promising that his team would work in accordance with the Electoral Act and the laws governing elections in the State.

Osun partners with CBN, SWACO, others to improve Farmers’ fortune