Oyetola: Man on a Mission to revamp Osun Health Sector

Few meters away from the jubilant crowd who had gathered to celebrate the commissioning of Anwo Primary Health Centre, located in the pastoral town of Irepodun of Osun, was Adijat, a middle aged woman. She is a petty trader. Just a day earlier, she had been delivered of a bouncing baby girl in the health centre.

Resting comfortably on her bed space in the newly built maternal ward, she exuded unmistakable excitement and satisfaction on hearing that representatives of State Governor, Mr. Gboyega Oyetola, were on an inspection tour of the newly renovated and equipped public healthcare facility. Her comportment spoke volume. She received the team warmly and expressed profuse gratitude to the governor for making it possible for her to receive the sort of commendable maternal healthcare the newly improved PHC offered.

It was certainly not difficult to tell this was one grateful citizen who considered herself a fortunate beneficiary of a growing legacy of Mr. Oyetola, who is simply on a mission of total revamp of Osun’s healthcare sector.

Riskat’s experience seemed an apt metaphor of teeming rural women, children and other citizens of Osun, who are receiving proper medical care, owing to the commitment of the government.

To commemorate the One-year anniversary of Governor Adegboyega Oyetola, about 700 residents of Osun State benefitted from the free surgical operation organized by the state government. This exercise pinpoints Oyetola’s commitment to the promotion of quality and healthy living of residents of Osun. 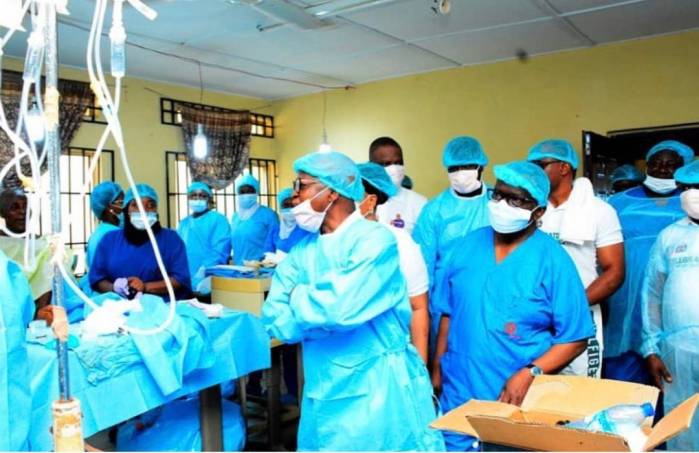 The free surgical operation tended to patients with different ailments ranging from hydrocelle, lipoma, breast lumps and other issues, who were operated upon and given necessary drugs across three Senatorial Districts of the State.

During his inauguration address, Governor Oyetola had pledged total transformation of the State’s health sector. According to him, “a healthy state is a wealthy state. Our commitment to primary health care in particular will be given impetus as highlighted in our campaign manifesto. We will encourage our people to key into the social health insurance scheme started by the immediate past administration. Our vision is to transform primary health care facilities to centres where our people can access basic health care services including routine immunization, family planning and screening for non-communicable diseases”.

Fortunately for Governor Oyetola, his desire has been significantly helped with a whopping $20.547 million grant the State received under the federal government-facilitated World Bank’s Save One Million Lives (SOML) initiative in which Osun was adjudged number two in a keenly competitive assessment among states in the country.

One year after, the administration, true to its pledge, has embarked on an ambitious revolution targeted at the revitalisation of nine of its General Hospitals and 332 Primary Health Centres – one per ward – across the state.

The plan also includes the provision of modern equipment, deployment of technology in the hospitals, supply of drugs and enhanced capacity building of healthcare workers to ensure improved service delivery.

The state is also strengthening the operations of its health insurance scheme, tagged Osun Health Insurance Scheme (OHIS), with a view to keeping out-of-pocket expenses of citizens under check.

To demonstrate its commitment, the government, within its first year in office, released the sum of N150million as take-off grant for the agency and over N477million as equity grant meant for the premium for the poor and the vulnerable.

With over 80,000 poor and vulnerable citizens already registered and validated, Osun has a rising reputation as one of the leading State Health Insurance Agencies in the country.

The insurance package is also gaining traction among civil servants and artisans as they are increasingly signing up to benefit from its comprehensive benefit package at a minimal cost.

Of the 322 PHCs earmarked for renovation across the state, the Administration has already completed and commissioned 100, with many more to following in the coming days.

Aware that funding his ambitious health plan would require more resources that the State can readily muster, Governor Oyetola is reaching out to development partners and investors alike.

Recently, while turning the sod of the 120-bed ward and 30 doctors’ quarters at the State Specialist Hospital, Asubiaro, Osogbo, he appealed to corporate organisations and relevant associations to partner with the State in its efforts to revamp the health sector. 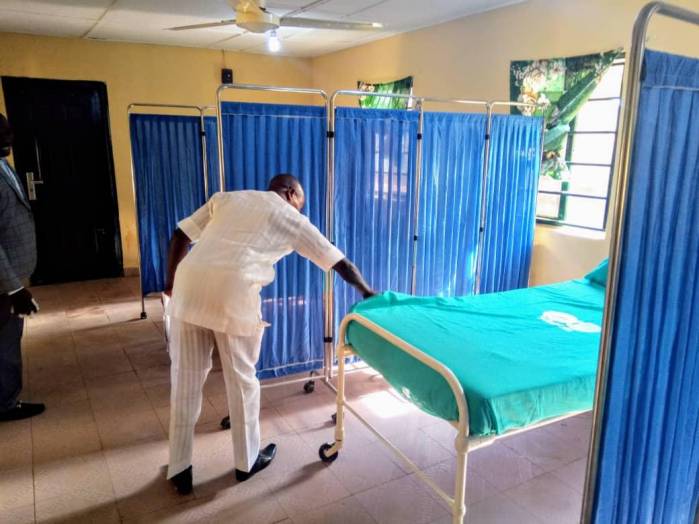 He seized the opportunity to enunciate further on his plans for the State’s Specialist Hospital, as a subset of his wider health sector reformation plan. “The State Specialist Hospital is the flagship of the facilities under the Hospitals Management Board. It is a multi-Specialist Hospital which offers specialized services in major areas which include: obstetrics and gynaecology, general surgery, radiology, pediatrics, internal medicine, physiotherapy and medical rehabilitation, optical services, medical laboratory services, dentistry, HIV testing, counselling and treatment, TB/leprosy care and family planning services, among others. Our administration has carried out major works on the theatre complex, blood bank building, medical laboratory, trauma centre, hope clinic and the external wall of the hospital.

The State of Osun Agency for the Control of HIV/AIDS (O’SACA) will soon start a project that will involve the introduction of incentives for pregnant mothers who attend ante-natal clinic and have HIV test result’’, Governor Oyetola said.

Deservedly, the efforts of the administration is well-received by teeming citizens of the State. Speaking on behalf of the residents of Ijesaland at the inauguration of a newly renovated Primary Healthcare Centre at Imo, Ilesa, prominent persons in the area, including former Health Minister, Prof. Isaac Adewole, Chief Kunle Odeyemi and Engr. Remi Omowaiye, were unanimous in their assessment. They noted that the administration had shown that it would do better than the previous administration.

Adewole gave thumbs up for the strides Oyetola is recording. “I said it recently and I am repeating it that no government in Nigeria has embarked on the construction and renovation of 332 PHCs at a time as being done by the present administration in the state”, he said.

For Chief Odeyemi, “there is no doubt that this initiative will further help to enhance quality service delivery and boost the sector for the benefit of the people of the state.”

In the same vein, health workers in the State, who interestingly were at loggerhead with the immediate past administration, have also thrown their weight behind the good work being done. They commended Governor Oyetola for transforming the health sector in the State.

The workers, under the aegis of Medical and Dental Consultant Association of Nigeria, Ladoke Akintola University of Technology Teaching Hospital (LAUTECH), Osogbo branch, gave the commendation during a visit to the Governor recently. 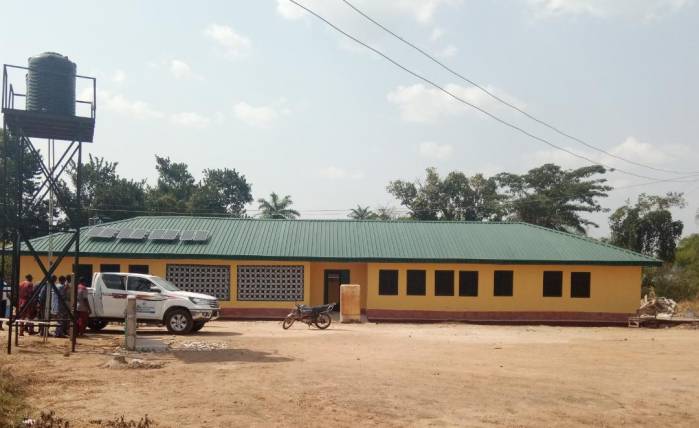 Chairman of the association, Dr. Rasak Akindele, who spoke on behalf of his colleagues, applauded the administration for prioritising the welfare of health workers.

He lauded the efforts of the State in bringing to the people the dividends of democracy. He described Oyetola as a lover of health practitioners and commended the government for restoring and sustaining the payment of full salaries to workers.

“This administration has shown a high sense of commitment to refining the health sector for greater productivity and development. The Governor has been a listening father whose passion for human and capital development cannot be over-emphasized.

I commend you for your activities at raising the bar of quality healthcare service in the state particularly on your commitment to maintaining the standard which LAUTECH Teaching Hospital is known for.

We have seen your zeal and commitment tailored to ensure an improved standard of living for all workers, particularly health practitioners. We are proud to have you as our Governor. Your administration has started on a good footing and we are proud to identify with myriads of achievements recorded by your government so far,” Akindele said.

While thanking the governor for maintaining regular salary payment to all categories of workers in the State which he observed had boosted the morale of workers to render services diligently and professionally, he pledged renewed commitment and industrial harmony to support the Oyetola administration in its determined quest to taking the State to greater heights. 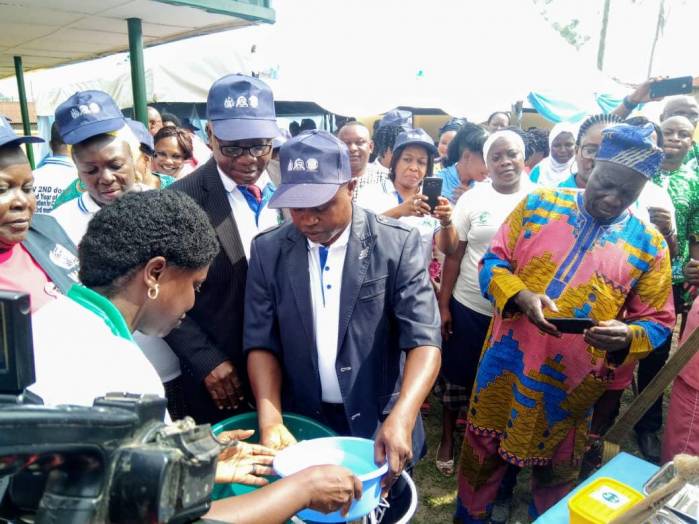 On his part, the Executive Secretary, State Primary Healthcare Development Board, Dr. Oluwole Fabiyi, commended the administration for putting in the front burner, the general well-being and health of the citizens of the state.

He described the completion and inauguration of the 100 PHCs across the state as a confirmation of the administration’s commitment to rapidly improve Primary Health Care Service delivery in the State. 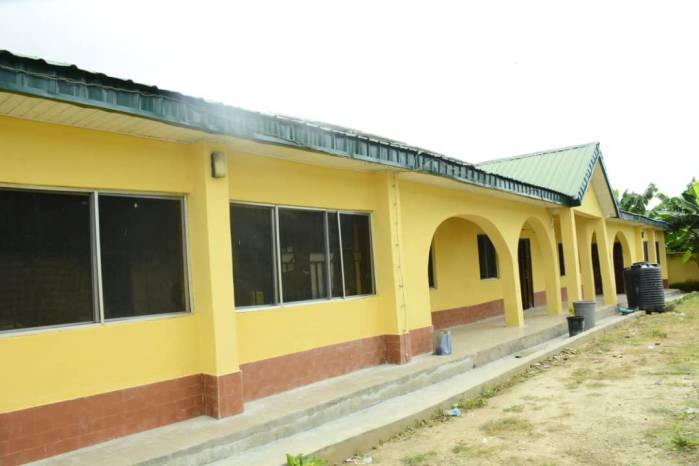 “With this improvement in the physical infrastructure, equipping of the PHCs, purchase of operational vehicles, provision of drugs worth several millions of naira and motivation of the health personnel, the decay often seen in the health sector is gradually becoming a thing of the past.

Your commitment to the health sector will no doubt result in improved maternal and child services; leading to a rapid reduction in the rate of both maternal and childhood morbidity and mortality in the state,” Fabiyi added. 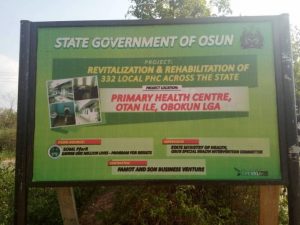 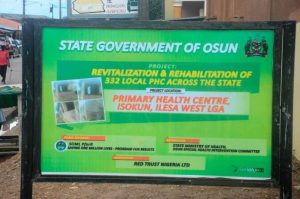 With Oyetola’s commitment to the health sector and his administration’s drive to deepen the State’s economy, Osun may well be inching towards achieving the United Nation’s Sustainable Development Goal 3 focused on good health and well-being for all.