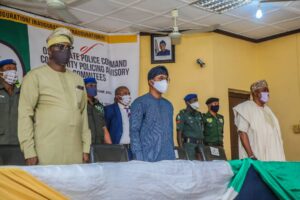 Inaugurating the Committee at the Multipurpose Hall of the Local Government Service Commission, State Government Secretariat, Osogbo, he said the initiative by the Inspector General of Police, Adamu Mohammed was “a creative and proactive solution to the pervasive security challenges in the nation.”

The Governor who commended the IG for introducing the initiative, said it would complement the State government’s efforts to secure the lives and property of Osun people. He added that his administration had prioritised security as part of efforts to reposition the state and build a virile economy. 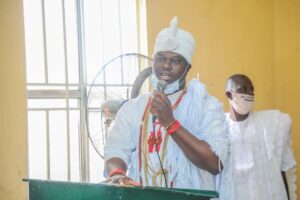 Oyetola noted that the initiative was to make the people own policing at the community level, participate in its operations and partner with the conventional police to achieve effective and efficient security and safety architecture. 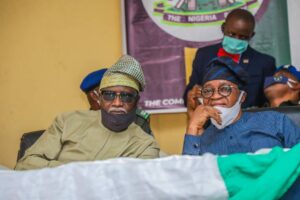 Speaking further, Oyetola said “Considering the composition of these structures which allows for the participation of leadership of the community and relevant groups such as traditional rulers, religious organizations, the civil society, Labour Unions, the youth, people living with disabilities, community leaders, educational institutions, town unions, professional unions, hoteliers, vigilance groups, hunters, farmers, herders, and socio-cultural associations, I am persuaded that the holistic structure and composition of this Community Policing Advisory Committee will serve our collective desire to be safe and secure.

According to the governor, effective security is the answer to his administration’s desire to deliver investment, industrialisation and achieve prosperity and good life for the people of the State. He further noted that the birth of community policing would orchestrate an improved security operations in the state.

“I therefore appeal to the leaderships of the various outfits not only to carry out their duties with the highest levels of professionalism and integrity but to also continue to show leadership and engage in dialogue where there are grey areas, in the public interest,” the governor added.

Oyetola also commended the administration of President Muhammadu Buhari for giving the right leadership and enabling environment that birthed the initiative of community policing in the country whose ultimate purpose is to further deliver effective policing to a nation under the siege of diverse shades of insecurity.

Earlier, the Assistant Inspector General of Police in charge of Zone 11, Osogbo, Mr. David Oyebamiji Folawiyo, applauded Governor Oyetola for taking security matter to the front burner since the inception of his administration.

He also lauded the various support being given to security agencies by the state government, which he described as a strong motivation at ensuring efficiency and diligence to duties.

While describing the launch of community policing in the state as a welcome development, the AIG said the initiative became a necessity particularly at a time the nation is battling with pocket of insecurity challenges.

He said the initiative would further help to strengthen the security particularly at the grassroots as efforts of the police would be brought to the locals just as he promised the agency’s absolute support to ensure the success of the initiative.

Also speaking, Speaker, Osun State House of Assembly, Hon. Timothy Owoeye, said the establishment of community policing would go a long way to bridge the gap and fill the vacuum in the security sector in the state.

He said the initiative remains one of the ways to strengthen the security and guarantee the safety of lives and property of the citizens at local levels, saying the initiative will also help to complement government’s efforts towards the maintenance of laws and order in the state.

Owoeye said the House would continue to support the government’s efforts through the legislative processes at ensuring a safe, peaceful, secure and sane society.

The Ooni of Ife, Oba Adeyeye Enitan Ogunwusi, who was also present at the inauguration, extolled the state government for being alive to its constitutional responsibility of guaranteeing the security of lives and property of the citizenry.

He called for a collective effort in tackling the myriad of security challenges confronting the nation at large and the State in particular.